There are many famous destination in Da Nang include a good-mix of centuries old pagodas, French colonial buildings but Da Nang is known as the tourist capital of South-Central Vietnam. Asia Eyes Travel would like to recommend you top 4 attractive tourist in Da Nang as follows:

It’s not wrong to say that Ba Na is known as the “green lung” of Da Nang city. Because this is a place bring cool climate and fresh air to visitors come here. Ba Na Hills is one of many destinations that you certainly can not overlook when going on a Da Nang tour. With many pretty sceneries and attract games, Ba Na Hills commitment to brings visitors many exciting experiences. Ba Na Mountain which is located in Hoa Ninh Commune, Hoa Vang District and that was discovered by the French in the late nineteenth century. It is about 40 km to the West of Da Nang city center. Ba Na’s tourist center is located at the peak of Mount Chua, 1489 meters above sea level. When you come to visit, experience Ba Na often go in the day and will return to the city center. If you have time, you should enjoy a beautiful night in Ba Na – the mountainous, romantic dream.

Next it is Marble Mountains, vietnamese people called by name  Ngũ Hành Sơn is one of five marble and limestone hills which is located in Ngũ Hành Sơn District, south of Da Nang city. The five mountains are named after the five elements: Kim (metal), Thuy (water), Moc (wood), Hoa (fire) and Tho (earth).

All of the mountains have cave entrances and many tunnels, and it is possible to climb to the summit of Mount Thuy. Several Buddhist sanctuaries can also be found within the mountains, making this to become a tourist destination. 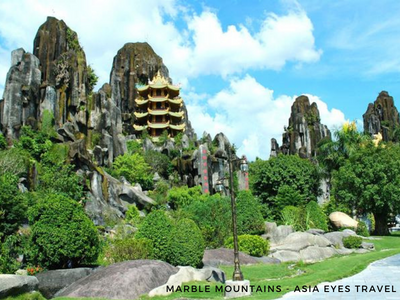 Linh Ung Pagoda attracts a large quantity of visitors every year and Buddhists all over the world who come to explore and learn more about Buddhist culture. The pagoda is thought about a Buddhist paradise on the earth. Linh Ung Pagoda is settled on Son Tra Peninsula, 639 meters above the sea level and 10 kilometers away from the center of Da Nang city to the Northeast.

The pagoda has an area of 20 hectares with a big complex of buildings including the main hall, the ancestor’s house, the lecture hall, the library, and the Arhat statue garden. Moreover, the pagoda is the most largest in Da Nang. Its architecture design is a tuneful combination and between the modern style and attitude Vietnamese style. Many tourists visit Linh Ung Pagoda to see the impressive beauty of the Lady Buddha statue and pray for quality things. 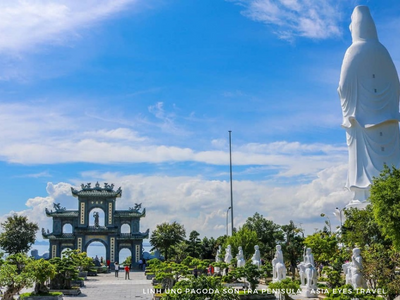 During the 4th to 13th centuries there was a unique culture on the coast of contemporary Vietnam, owing its religious origins to the Hinduism of India. This is graphically illuminated by a series of impressive tower temples in a dramatic site that was the religious and political capital of the Champa Kingdom for most of its exstence. Once the religious and political capital of the Champa Kingdom, My Son Sanctuary is located in a landscape in Duy Phu commune, Duy Xuyen district, about 70 km southwest of central Da Nang city and 40 km far from Hoi An. As a result of wars, many tower temples were damaged. Moreover, preservation work has been carried out andremaining tower temples have been maintained. At this place, visitors will hear and learn about the history of the country with historical places. This is also one of the destinations not to be missed when coming to Da Nang city.