The best thing to do in Phu Quoc is, of course, lounge on the beach. You’ll likely hear many different responses when you inquire about the most beautiful beach in Phu Quoc. And that’s because there are so many to choose from, you really can’t go wrong!

Sao Beach is arguably the most picturesque on the island with powdery white sand and crystal clear water. There are plenty of umbrellas and lounge chairs that you can rent to spend the afternoon enjoying the beautiful calm water. Sao Beach is eastern facing so unfortunately, you won’t get the best sunset here. But you can always head to the west side of the Phu Quoc in the afternoon to catch sunset.

Long Beach (also called Truong Beach or Bãi Trướng) is the most popular beach on the west side of Phu Quoc island. True to its name, the beach is incredibly long with over 12 miles of golden sand. Long beach is broken into two sections – North Long Beach and South Long Beach. 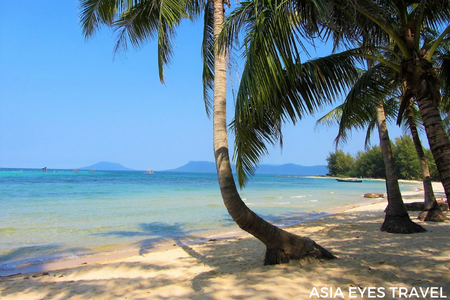 North Long Beach stretches for ~3 miles from the Trang An Phu Quoc Beach Resort on its northern end to the Song Tranh Canal at its southern end. This part of long beach sits closer to the town of Duong Dong (Dương Đông) which is the main town on the island of Phu Quoc. It’s also more built up with a variety of bars, restaurants, and hotels lining North Long Beach.

South Long Beach is about 9 miles in length and is home to newly developed upscale resorts. It is separated from the north end by the Sông Tranh estuary. Most of the beaches are owned by the luxury resorts here but you can still find pockets of public beach access.

We loved watching sunset a bit further north on the island, at Bai Ong Lang Beach. There are plenty of trees to provide shade and the beach has easily accessible public access. Plus the bar at the Coco Palm Beach Resort often has live music in the evenings!

Just around the corner from Bai Ong Lang Beach is Mango Bay which is technically a private beach and only accessible through Mango Bay Resort. We walked along the beach with no trouble and it appeared that many of the beachgoers were not actual hotel guests.

There are fewer nice beaches on the Northern half of Phu Quoc. The coastline is rockier with small sandy bay’s tucked here and there. These small beaches are more remote and you’ll likely have them to yourself but they are not as nice or well maintained as the beaches in the south. The exception is Bai Dai Beach in front of the Vinpearl Resort which, unfortunately, is next to impossible to visit unless you are staying at the resort.

2.Cruise Around Phu Quoc on a Motorbike

Most of the roads around Phu Quoc are well maintained, in fact, there is a brand new road on the northeastern side of the island that is rarely trafficked. The only rough road that we encountered was on the far northern end of the island which we took to visit the Ganh Dau Trail (“Forest Walk” on Google Maps) and Starfish Beach. 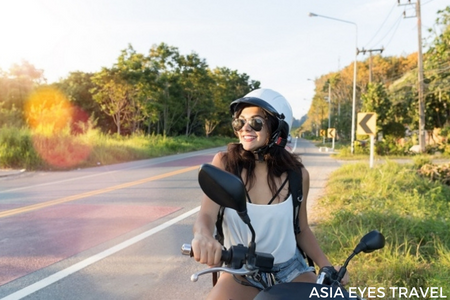 Renting a motorbike will allow you to explore the island and visit various beautiful beaches without having to worry about hiring a driver. Most hotels in Phu Quoc have bikes available to rent or there are plenty of small rental shops on every corner.

Phu Quoc Prison (also known as Coconut Tree Prison) was built in 1949 by French colonists. There were as many as 40,000 Vietnamese soldiers and political figures who were imprisoned and tortured here during the American War (often called the “Vietnam War” when we refer to it in the USA). 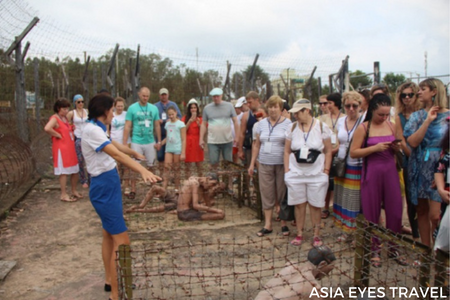 The prison was declared a national historical site in 1995 and opened to the public to visit. For a small entrance fee you can see exhibitions that depict the various types of torture that were endured here including electrocution, crucifixion, and food deprivation.

If you are interested in Vietnam War history and intrigued by torture methods, this museum is one of the most interesting things to do on Phu Quoc island!

The Phu Quoc Night Market is a bustling open-air street market in Duong Dong that runs in the evenings from 5:00pm until midnight. Here you’ll find more than 100 different stalls selling seafood, ice cream, banana pancakes, drinks, and traditional souvenirs. After a l 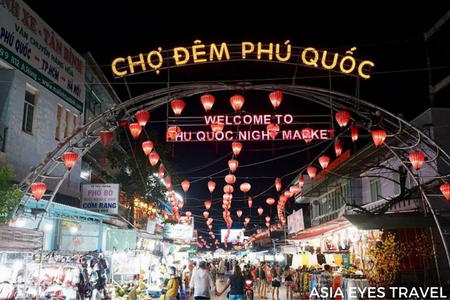 ong day of lounging at the beach, the best thing to do in Phu Quoc in the evenings is to explore the night market.

You can stop at one of the many seafood restaurants lining the streets of the night market for dinner or you can simply graze your way through all of the food stalls while eating a little bit of whatever catches your eye!

The Phu Quoc Cable Car is an oversea cable car and is the longest and continuous 3 cable aerial car system in the world. It’s located on the southwestern tip of the island. Your journey will begin on Phu Quoc island at An Thoi and your ride will last for about 15 minutes, ending at Hon Thom Island (also known as “Pineapple Island”).

During your cable car ride you’ll enjoy 360° views of the An Thoi Archipelago filled with tiny islands and vibrant turquoise water. Just make sure you go on a day when the weather is clear so you get the best views from your seat!

Starfish Beach is on the northern end of Phu Quoc Island and it’s known for the starfish that gather on the sandbar just offshore. 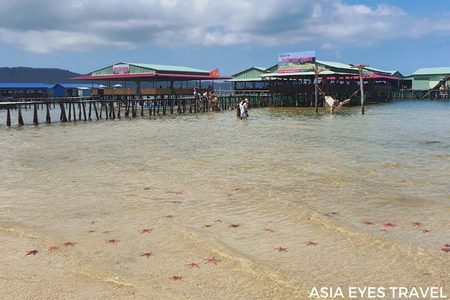 If you wade out in the water a bit it’s easy to spot them laying on the ocean floor. It’s not a good idea to disturb the starfish, but unfortunately, you’ll see countless people around you picking them up and posing for selfies. 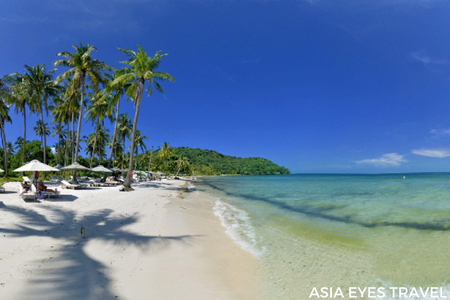