Departure date: On your request

Tour price: Depend on the number of people in your group and your hotels requirement 3* 4* or 5*

Upon arrival at Phnom Penh International Airport, process immigration procedure (visa on arrival is available or obtain in advance via www.evisa.gov.kh), then get your luggage and walk straight to the Exit Gate where our driver is waiting. After self-introduced, you’ll transfer directly around 30 minutes to the hotel in the city for check in. Time to fresh-up and relax at hotel. Overnight in Phnom Penh.

8:00AM: We are going to visit the Royal Palace compound (closed for renovation and reopen on October 2022) build in 1866 by the Predecessors of King Norodom, is the most conspicuous feature and also one of impressive colorful Khmer-style Palaces. Nearside the Royal Palace is Silver Pagoda (The Emerald Buddha temple), display plenty of Buddha Statues that were decorated and made by diamond, emerald, gold and silver. Continue to National Museum, the distinctive red building with a beautiful Khmer architecture was built since 1917 and contains more than 5000 art objects made of sandstone, bronze, silver, copper, wood and others. Travelers will proceed to visit Independence Monument, which was constructed in 1954 after Cambodian took their country back from French colony. We will learn about the dark side of Cambodia – Its more recent turbulent and harrowing history. Initially you visit the Toul Sleng Genocide Museum (also known as S21), ironically a former school, located in a quiet Phnom Penh suburb, this was the infamous Khmer Rouge prison / torture center.

At noon, we’ll visit Phsar Thmey “The Central Market”, a large market constructed in 1937 in the shape of a dome with four arms branching out into vast hallways with countless stalls of goods. The four wings of this gigantic yellow dome are teeming with stalls that sell goods ranging from gold and silver, antique coins, money exchange, books, flowers, food, fabrics, shoes, souvenirs, seafood and countless other products. Newt, we head to visit Wat Phnom “Mountain Pagoda” is a Buddhist temple that symbolizes the name of Phnom Penh, located on the hill. According to legend, the first pagoda on this site was erected in 1372 to house four statues of Buddha deposited here by the waters of the Mekong River and discovered by Lady Penh. Wat Phnom is the most popular place for local people come to play healthy spot or praying for their good luck as well as admire the sundown. Overnight in Phnom Penh.

7:30 AM: Shuttle bus will pick you up to Siem Reap. Upon arrival in Siem Reap bus station, meet our driver and transfer to hotel for check-in.

We drive to Angkor Thom that was the masterpiece of King Jayavarman VII. Following the occupation of Angkor by the Chams from 1177 to 1181, the new king decided to build an impregnable fortress at the heart of his empire.

We will enjoy a boat ride on the Tonle Sap Lake. This is the largest permanent fresh-water lake in South East Asia and flows into Tonle Sap River. We will see a fishermen’s “floating village” with floating schools, floating police station, etc. It is same as a big village floating on the lake, and the “village” move from place-to-place following water levels and current. And then ARTISAN D’ANGKOR has developed from the ambitious belief that it is possible to revive ancient Khmer Arts & Crafts while improving the lives of thousands of people living in rural areas.

In the afternoon, we will transfer you to airport for your flight to next destination. It’s time to say goodbye, we thank you for traveling with us and warmly welcome you to come again. 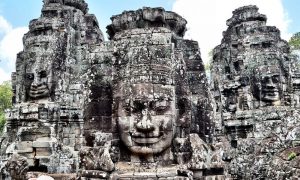