5 Best Things to Do in Ha Giang

Things to do in Ha Giang?

Ha Giang is the final frontier of North Vietnam and home to a large number of ethnic minorities including H’Mong, Tay, Dao, Lo Lo, ect. This destination has been more popular for those who are nature lovers and adventurers thanks to its of natural beauties and indigenous culture. As this is not the easiest place to reach, Ha Giang will be less busy and offers visitors the opportunity to explore Vietnam’s raw beauty in a way that few other places still do. To make your trip to Ha Giang an unforgettable experience, our complete guide will show you the following list of things to do and places to see in Ha Giang loop. No need for further waiting, let’s explore with us!

Con Duong Hanh Phuc (or Happiness Road) is about 200km long connecting from Ha Giang City to Dong Van Town then Meo Vac Town.Without a road, Ha Giang was so remote to travel. Therefore, the appearance of this road brought a new opportunity for the stronger development of Ha Giang. 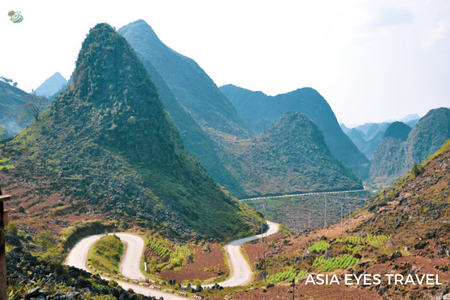 To make the road (1959-1965), many volunteers, workers from 16 ethnic groups had joined hands, even sacrificed their lives to open this very first road in Ha Giang. Its name presents the wish for happiness from the local people to the future.

Also located on this road is 20-km-long Ma Pi Leng Pass – one of the “four great peaks of the pass” in the mountainous regions of Northern.

Quyet Tien Market is a simple rustic place, located right at the foot of Heaven Gate in Quan Ba District. On every Saturday morning, this market is held for residents in the area with all kinds of vegetables, cattle and handmade goods which are displayed beautifully and attractively.

You can also have chance to taste some specialties of the area such as thang co, five color sticky rice, corn wine, soybeans…

This can be considered as the first upland market that you meet on the journey to conquer Ha Giang. About 1 hour far from Ha Giang City, this market should not be missed if you are on its morning Saturday market

Quan Ba ​​Heaven Gate is on 1500m above sea level, offering breathtaking views of the below valley. This is the first gateway to Dong Van plateau. In 1939, people built a giant wooden door 150cm thick at the Gate of Heaven. At one time in the past, behind this wooden door was another “world” – also known as “the autonomous region of the Meo people”, including the districts of Quan Ba, Meo Vac, Yen Minh and Dong Van. 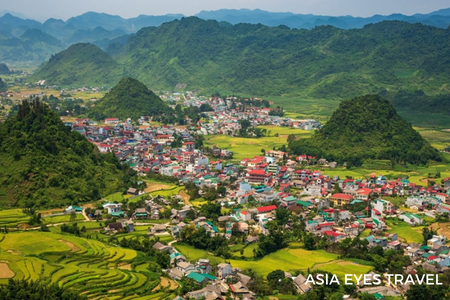 Quan Ba ​​Twin Mountains are located next to National Highway 4C, 40 km from Ha Giang City. Between the rocky mountain and terraced fields, two strange-shaped mountains emerge, making visitors amazed by the great beauty of the nature. These two mountains are associated with the legend of poetic Fairy Mount, become a lovely sight to behold from the road because of its charming appearance.

Dong Van Karst Plateau Geopark officially became a member of the UNESCO Global Geoparks Network and Asia Pacific Geoparks Network in 2010. It takes up most of the area of four of the province’s districts: Quan Ba, Yen Minh, Dong Van and Meo Vac in the area of 2356,8 km2. This geopark is on the height of 1400 – 1600 meters above sea level, featuring 60% limestone on its surface with the spectacular and unique landscape of high mountains and deep canyons. Mieu Vac Mount is highest peak (1971m) while Tu San is deepest canyon (700-800m). 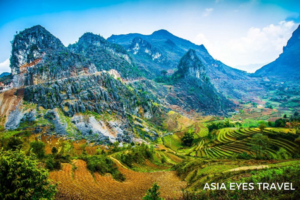 The geopark is rich in fauna and flora species as well as cultural heritage of the area with home to 17 ethnic groups such as the Hmong, Dao, Lo Lo, Tay, Nung… One of the mysterious things is that there are the scripts, ancients letter found on many rocks, but the meanings of these letters are left unknown until now.

Sung La Valley is about 20km from Dong Van District and be considered as the most beautiful upland commune of Dong Van Karst Plateau Geopark. Looking down Sung La Valley from the highest and most beautiful point at Pho Bang junction (from Yen Minh to Dong Van), you will see a peaceful and beautiful natural picture. In spring, the valley turns brilliantly colorful with many blooming flowers. When the winter comes, Sung La becomes colder and puts on a new shirt with the white-yellow of buckwheat flowers and the yellow of mustard flowers. 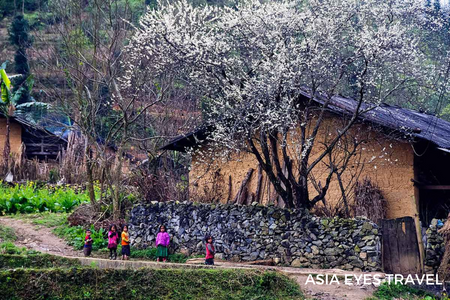 In the center of Sung La Valley locates a small village – Lung Cam with more than 60 households of ethnic groups (Lo Lo, Hmong, Han) living together. This place still preserves the human beauty as well as the tangible and intangible cultural values such as folk songs, dances and traditional instruments. There is a famous check-in point that visitors should not miss, that is the studio “Pao’s House” which is a typical house with all rich in the colors of the plateau.