Things to Do in Phnom Penh

Top-Rated Attractions & Things to Do in Phnom Penh

Vibrant, bustling Phnom Penh is the heartbeat of Cambodia. This sprawling capital, spread out beside the banks of both the Tonlé Sap and Mekong Rivers, is a city of wide central boulevards and skinny back alleys, where modern and old collide.

The Royal Palace complex is the city’s top attraction but for anyone interested in exploring Cambodia’s 20th-century history, Phnom Penh is also a vital stop, for it is home to two of the country’s most sobering places to visit.

The Killing Fields of Choeung Ek and Tuol Sleng Museum (the prison of S-21) both provide an insight into the reign of terror this nation suffered under Khmer Rouge rule.

Travelers heading out to Cambodia’s premier tourist attraction of Angkor Wat also benefit hugely from a stop in the capital, as the wonderful National Museum of Angkor is here.

For more ideas on your sightseeing options, read our list of the top attractions and things to do in Phnom Penh.

Note: Some businesses may be temporarily closed due to recent global health and safety issues.

1.Admire the Architecture of the Royal Palace

The highlight of Phnom Penh is the beautiful Royal Palace – the seat and residence of Cambodia’s royal family since the 1860s.

The spired-roof pavilions of the complex are an excellent example of classic Khmer architecture. 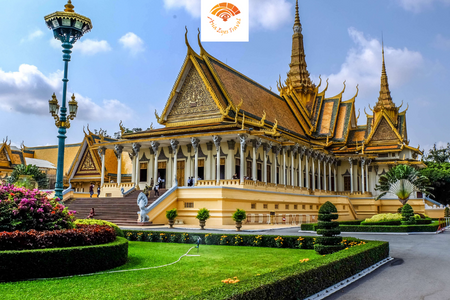 Both the Throne Hall area and the Silver Pagoda – set within manicured gardens – are open to the public for visiting. The Throne Hall was built in 1917, replacing an earlier wooden structure.

The Silver Pagoda escaped the brutal destruction of the Khmer Rouge reign and so still contains some beautiful artifacts. The interior ceiling mural depicts the Cambodian epic poem, the Reamker, which is based on the story of the Indian Ramayana.

2.See the Exhibits inside the Cambodia National Museum

The traditional Khmer building that houses the national collection was built in 1920.

Inside, the dazzling array of ancient Khmer artistry, with more than 1,800 objects on display, is a must visit for anyone with an interest in Cambodian history. 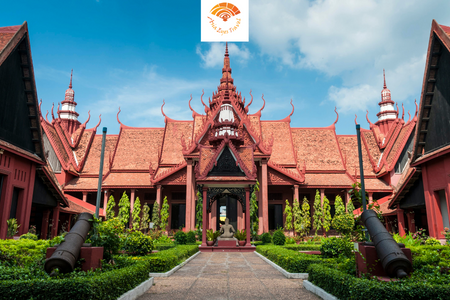 The major highlights of the museum galleries are the Vishnu head excavated near the vast temple complex of Angkor Wat; the incredible Angkorian collection, with statues from the temples of Koh Ker and Angkor Thom; and the large exhibit of pre-Angkorian artifacts that trace Cambodia’s Funan and Chenla periods.

The Killing Fields of Choeung Ek are a somber reminder of the terror of the Khmer Rouge whose brutal regime, intending to turn Cambodia into a socialist agrarian society, ruled the country between 1975 and early 1979.

In under four years, it’s estimated that between one and three million Cambodians were killed under Pol Pot’s authoritarian command. 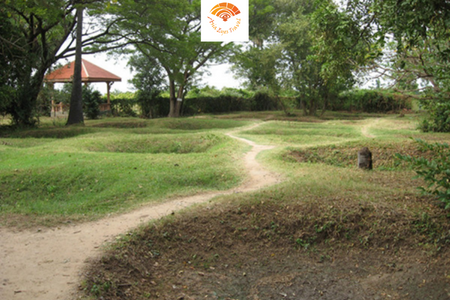 Many perished because of famine and disease, but also hundreds of thousands of Cambodians – intellectuals, educated people such as teachers and doctors, regime opponents, and simply anyone suspected of being an opponent – were murdered.

There are 129 mass graves here, 86 that have been excavated, exhuming the remains of 8,985 people. At the center of the area is a memorial stupa that contains more than 8,000 skulls.

A visit here is an entirely sobering experience that will aid in your understanding of this tumultuous period in Cambodia’s modern history. Choeung Ek lies off Monireth Boulevard.

It was here, in the Khmer Rouge’s Security Prison S-21 that some of the regime’s worst torture atrocities were carried out. More than 17,000 people passed through these gates between 1975 and 1978, accused of betraying the revolution in some way. 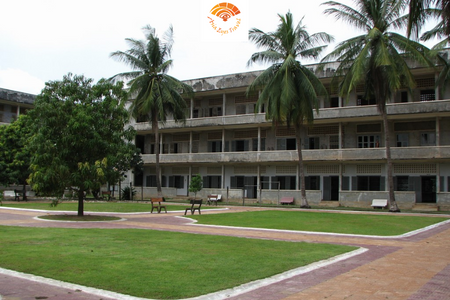 Nearly all prisoners brought here were once themselves members of the Khmer Rouge who were turned on during one of the regime’s many internal purges.

The visiting experience is made ever more visceral by the displayed photographic evidence hanging on the walls of the sparse cells next to empty beds. S-21 was exceedingly well-managed by Comrade Duch (the head of the prison) who made sure that extensive records were kept. As the prison was hastily abandoned when the Vietnamese took Phnom Penh in 1979, the detailed notes and photographs have survived.

Phnom Penh is a riverine town, and one of the most relaxing ways to go sightseeing in the city is to take to the water. There are regular sunset cruise tourist boat departures from the riverfront between 5pm and 7.30pm, which head along the Tonlé Sap and Mekong Rivers. 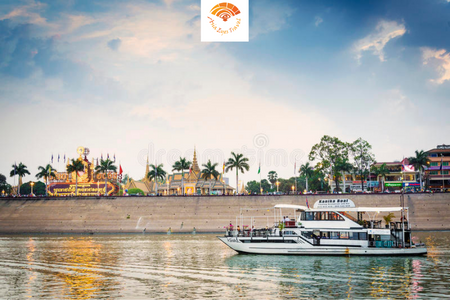 Alternatively, you can also hire a private boat nearby to head out on the water at any time of the day (you’ll want to put your bargaining hat on though, if you’d like to hire a private boat). This is a great way to get away from the bustling motorbike-clogged streets for an hour and soak up the gentler pace of local river life.

Phnom Penh is decidedly flat. The only rise in the landscape here is the 27-meter-high hillock that is home to the temple of Wat Phnom. 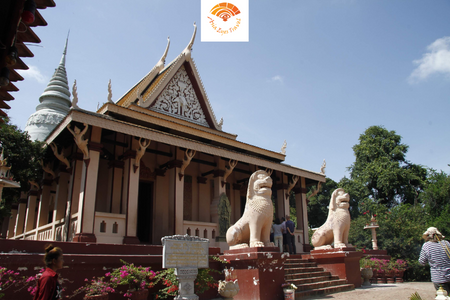 The first religious building on this spot is thought to have been constructed in the 14th century and has been rebuilt several times, with the current main temple sanctuary dating from 1926.

This is one of the city’s most important Buddhist temples and is often bustling with locals leaving offerings here and praying at the various shrines that surround the main sanctuary.

7.See the Stupas of Wat Ounalom

The most important temple complex in Cambodia, Wat Ounalom is the headquarters of Buddhism in the country. A stupa within the complex contains one of the Buddha’s eyebrow hairs. 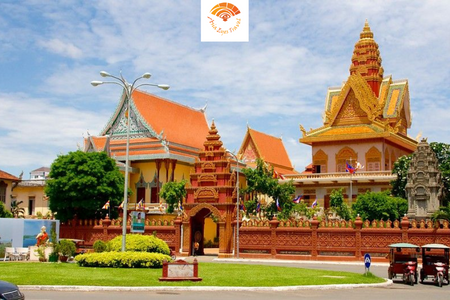 The wat was first situated here in 1443 and although it suffered considerable damage during the Khmer Rouge era, with many of its statues and religious iconography destroyed, it is thriving again today.

Of particular note for visitors is a beautiful Buddha statue in the main building’s third floor that has been reassembled after being smashed to pieces by the Khmer Rouge and a statue commemorating Huot Tat, the fourth patriarch, who was murdered by Pol Pot, on the 2nd Floor.

8.Shop in the Russian Market

You’ll find everything here from tacky souvenirs (much made in neighboring Thailand rather than locally produced) to beautifully-made local wooden handicrafts and Cambodian silks, along with bundles of stalls selling exceedingly cheap clothing. 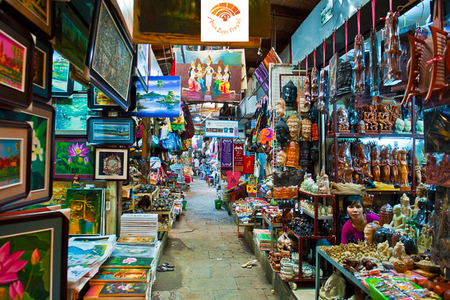 This is not the place to come for some midday browsing, as temperatures skyrocket within the market, so aim for an early morning visit. The market opens for business at 6am.

This is also just the place to put your haggling hat on and try out your bargaining skills.

The market’s real name is Psar Tuol Tom Pong, but earned its moniker due to the number of Russian foreign residents of Phnom Penh who used to shop here.

You’ll find everything here from tacky souvenirs (much made in neighboring Thailand rather than locally produced) to beautifully-made local wooden handicrafts and Cambodian silks, along with bundles of stalls selling exceedingly cheap clothing.

This is not the place to come for some midday browsing, as temperatures skyrocket within the market, so aim for an early morning visit. The market opens for business at 6am.

This is also just the place to put your haggling hat on and try out your bargaining skills.

The distinctive domed building that holds the central Psar Thmei market was built in 1937 in Art Deco style and dominates Phnom Penh’s central city. There are excellent opportunities for soaking up a slice of local life here with the market’s huge array of local produce on display and plenty of hustle and bustle. 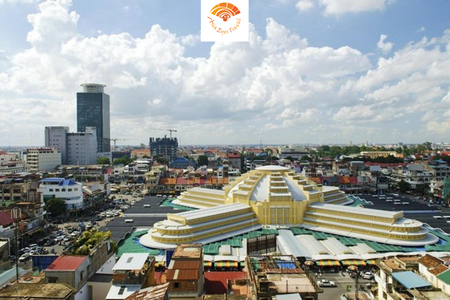 Everything is sold here, from fresh fruit and vegetables to jewelry and clothing, and the market is abuzz with energy from early in the morning to early evening.

It’s a great place for an aimless wander, and keen photographers will find plenty of colorful scenes to capture.

Khmer era temples, artistic performances and museums abound as Phnom Penh’s charm peaks out from every boutique Phnom Penh hotel, bistro and back alley. The Khmer temples and monuments found in Phnom Penh are some of the most stunning examples of Buddhist architecture and art that exist today.